Health and Nutrition in Schools

America’s national school lunch program is in dire need of a nutritional upgrade. I find it interesting that with the wide scope of information found in Teaching Today, there was no mention of nutrition. Nutrition and health is intricately linked to the performance,  and educational development of teacher and student.  Of all the ignorance displayed by health professionals, I sense that the nutritional neglect of our children by the U.S. Department of Agriculture, the National School Lunch Program, and the school system is by far the most devastating. The outdated definition of what is “nutritionally balanced” is reaping havoc on the health, behavior and academic performance of many of our students. It is sad to me that our diets and the diets of our youth, is dictated and provided by death industries, whose only concern is the accumulation of large sums of profit at the expense of the well-being on our nations’ people.

There is a crystal-clear need in our schools for alternatives to the empty calories and devitalized junk food that is widely available in the lunchroom and in vending machines.   This has resulted in a prevalence of obesity, hypertension, and diabetes in our youth and in time cancer, heart disease, and a host of other illnesses in adults.  The sad Standard American Diet (SAD)  is leading our children on the path of disease and an early grave. It seems odd to me, with all the knowledge and research decision makers, legislators, educators and others responsible for managing schools have, they do not understand the relationship between nutrition, mental development, and health. Or maybe they do and the goal is to suppress and oppress the massive of the people on a cellular level starting with what they put into their mouths.

The foods that are sanctioned by the government to feed to our children is by far the worst food s for mental development, vitality, behavior.  Food,   for our youth, should be chosen to increase energy, brainpower, and overall vitality. Instead our children our fed food with an abundance of sugar, fat,  and sodium in the form of meat, dairy, white sugar, white flour or overly processed foods and little to no fresh fruits and vegetables.  Candy, cupcake, ice cream, fruit snacks, pizza which I see served at the schools I have worked, on a regular basis, are the major culprits., which even contradicts the SAD food pyramid recommendations.

The schools and the media have done a very good job in miseducating the masses about proper nutrition; this is perpetuated most in the lunchroom.  We have been brainwashed to believe by the media and the junk food industries that diets high in meats, dairy and enriched starched constitute a healthy balanced diet. Research has indicated that most of the foods we eat as a nation and feed to our children in schools create widespread health problems. In all of the schools I have attended from preschool to college, the diet served to the students,  is substandard, in my opinion, and does not create young scholars but creates emotionally unstable youth who have challenges with concentrating and working cooperatively with others.  The current knowledge of nutrition and natural living must be adopted and incorporated into schools. We must work to reduce and eliminate harmful foods in school menus such as devitalized refined sugars, refined flours, trans-fats and high fructose corn syrup, empty calorie desserts, and  fried foods. We must demands integrity and quality food to make sure our children our on the path to healthier lives. 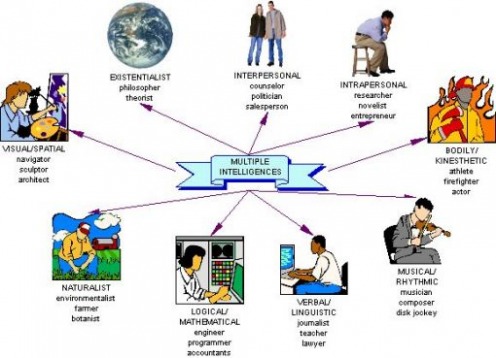 Howard Gardner’s scientific theory of multiple intelligences is the educational theory that supports what I believe about the true nature of each person’s innate abilities. Gardner’s theory according to him was intended as a contribution to psychology and was an extension of his interest in human cognition. Yet it has been embraced by progressive educators many of which were skeptical of the paramount focus by the education system on standardized testing, and so therefore has had it strongest influence in the educational field worldwide. Gardner’s theory challenges the traditional psychometricians’ limited view of intelligence that is measured only by linguistically and logical-mathematically based test, also known as IQ. He argues that there is a multiplicity of other intelligences or talents including musical, spatial, bodily-kinesthetic, interpersonal, intrapersonal, naturalist, and existential and as of 1998 he added spiritual that all people have to some degree (Lever-Duffy McDonald. 2008 p. 24-25). The intelligences he describes are summarized in the figure above. According to Gardener’s theory, a person has some of these intelligences highly developed, some less.

I have had students that had strengths in musical, bodily kinesthetic, spatial and/or interpersonal, yet due to a lack of early exposure, had weaknesses in either linguistic or logical-mathematical. I have also had the reverse where students were advanced linguistically or mathematically but lack important intra/interpersonal skills.  To accommodate these students and maximize their learning, I would employ the use of activities or learning materials, which taught the basic skills they needed in literacy and math using their natural gifts and talents. In order to solve the multitude of problems that exist in society today and that are predicted for the future, the next generation of leaders must be given an exceptional education that will benefit more than a few individuals but our whole society and furthermore the global community. An educational system that builds upon individual’s strengths as opposed to just indoctrinating people into status quo, will move us forward in leaps.

The Children Shall Lead Them Productions prides itself on being able to accomodates all learning styles.